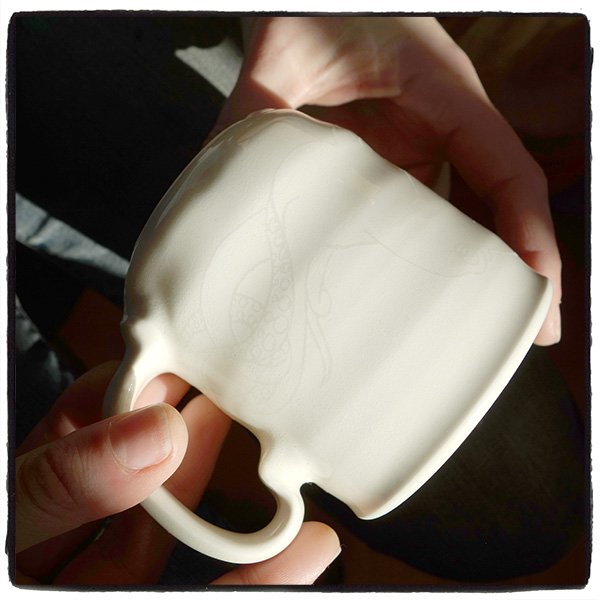 I made some slow cups. They’re objects that are impossible to understand without being held and turned. From a distance, the white image on the white background is invisible and will barely give up a hint or a glint. Even in a photograph, only one vertical swath can really be seen at a time. However, when these cups are up close, when they can be rotated in every direction, the drawings sparkle and reveal the depth between the decal and the clay. There’s a subtle shadow in that sandwich of glaze that makes the drawings float.

They make you work for them, instead of giving everything up right away. They’re the opposite of the easily digestible graphic pots I’m known for and they only work when the user is physically interacting with them, because it’s the shift in the angle that makes the drawing reveal itself. They disappear and reappear. Because of the work that the user has to put in, it feels more like a relationship, a kind of give and take that is not as common in the engineered objects we buy today. This working for the experience demands a slow down, hopefully not the kind that tries one’s patience, but rather the kind that draws you in when something unexpectedly beautiful happens.

Snowflakes, a mammoth, a yeti, a legendary turtle, clouds, and an octopus. Why did I choose these images? Because they are elusive in some way, just like the physical drawings that disappear and appear. Time slows down and places us on a continuum where we are no longer at the center by any measure. We remember that mammoth went extinct, that people long ago created stories to make sense of the world, the impossibility of tracking movement in an animal as foreign as an octopus, and the bittersweet nature of catching snowflakes (let alone clouds). By interacting with something unpossessable, it reminds us of our humanity and our place in time. 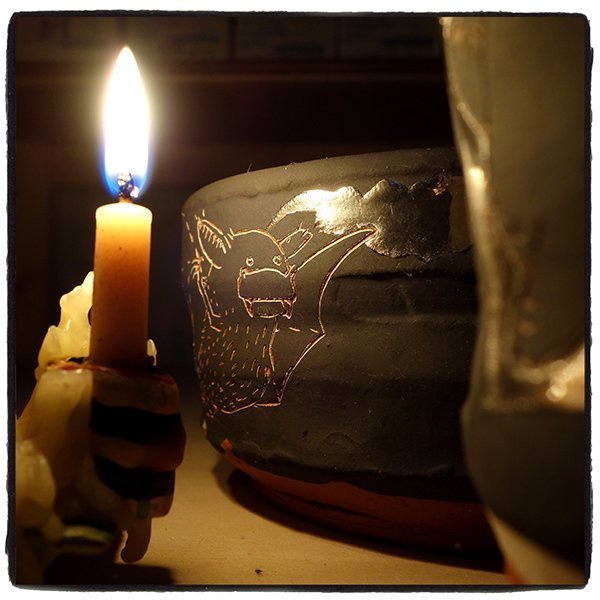 If the black teabowls with silver luster were about candlelight, these white cups are about sunlight. It’s no coincidence that the white drawings have come out of the studio this time of year when, in the colder parts of the Northern hemisphere, the sun sets at 4:00 and half the day takes place in darkness. In my mind, there are two kinds of light in the winter; the red warmth of firelight at night and the blue clarity of daylight that makes this glaze look bright and crisp. These lights compliment each other, neither is better and both are needed. Making objects specific to lighting is an interesting challenge that speaks to rituals, contemplation, and my desire to get at something more spiritual through something physical.