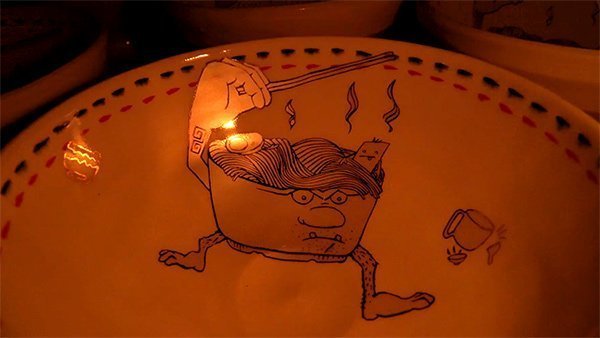 In the grand tradition Japanese yōkai, or monster/supernatural creature, I created Menbachi Bozu (Noodle Bowl Boy) to explain how warpage and breakage happens in the pottery studio. After all, mistakes couldn’t possibly be the fault of the artist! No matter the care taken when making pots, something (big or small) is bound to go wrong in every batch. Fabricating a superstitious explanation seemed to me a great excuse for imagining a pottery sprite and troublemaker in the studio. While we often see “kiln gods” on kilns to bless a firing, we never see the darker side of what happens in a pottery studio.

In modern times,  the term yōkai has become an all encompassing Japanese word for monsters or supernatural creatures. In the past, other words such such bakemono, obake, and mononoke were used to describe things that are unstable and shifting in nature. Bakemono, literally translates as “changing thing” and this power of mutability, like that of a shape-shifting fox that transforms into a human being, is powerful and mysterious. Mononoke was a term used during the Heian period (794-1185) and translates as “the instability of the thing”, the disconnect between solid reality and what we experience. These definitions fit seamlessly with the very nature of ceramics- transformative, unpredictable, and mysterious.

Beginning in the Kamakura period (1185-1333), a whole new subset of mononoke emerged called tsukumogami. The idea was that when common household object reach the ripe old age of one hundred, they take on an animated spirit of their own. With arms and legs, they run around wreaking havoc. Menbachi Bozu is a tsukumogami in his own right, warping and breaking pots as he goes. The print above of tsukumogami is one of the many inspirations I had for Menbachi Bozu. In fact, on trips to Japan, I often seek out old wood block prints more often than pots.

Menbachi Bozu is explored in three ways- a video that talks about the nature of imperfection and the link between making and food/ramen, the Menbachi Bozu Yōkai ramen bowl, and a tenugui, that will be released at the last sale of the year on December 14th. Here’s the direct link.

Special thanks to Ai Kanazawa Cheung of Entoten, who worked out the idea of Menbachi Bozu with me originally. It was her permission to make a new yōkai that allowed me to come up a new tsukumogami. All historical information comes from the book Pandemonium and Parade by Michael Dylan Foster, an Assistant Professor of Folklore and East Asian Languages and Cultures at Indiana University.